King Rhy Maresh is the biological son of King Maxim and Queen Emira and current reigning King of Arnes.

Rhy has curly black hair, honey-colored eyes, and tanned skin like his parents and the citizens of Arnes. Despite being a year younger than Kell, Rhy is "built like a statue" and is, therefore, physically stronger than his Antari brother.

Rhy often wears a ring of gold as a crown and enjoys to wear showy and, in Kell's eyes, gaudy accessories.

Rhy can be quick-tempered and frustrated easily, but at heart, he is fun-loving and endlessly kind and generous to those around him which is why he is well-loved by most citizens of Arnes. Furthermore, Rhy is rather reckless as his antics have often gotten him and Kell in trouble in the past, resulting in Kell having had to save him.

Rhy struggles with feelings of inadequacy to reign over Arnes due to his lack of magical prowess—something some Arnesians excoriate him for. Though he has some ability with fire magic, his restless nature and lack of focus, not to mention a lack of natural-born talent, prevent him from mastering the dedicated art of magic as Kell does. His frustration with his inability to use magic and the feeling of powerlessness is the reason why Rhy carelessly accepted a necklace from Holland Vosijk which was said to give him the strength he desired but, in reality, only allowed Astrid Dane to take over his mind and body. Rhy hates to be the source of someone else's suffering, often blaming himself and feeling immense guilt for the sacrifices that others make for him.

Despite his shortcomings in magic and his personal fears, Rhy shows himself time and time again to be a good king and leader. He cares deeply for his people, just as his father did before him, and took command quickly after his death, proving his devotion by wandering the streets of a fallen London and gathering those who he could save.

Additionally, in his private life, Rhy tended to enjoy a variety of sexual partners; at least, up until he began a relationship with an old flame again.

A Darker Shade of Magic[]

A Gathering of Shadows[]

A Conjuring of Light[]

Alucard and Rhy have a long and rather complicated history. Rhy fell for Alucard when he was a young seventeen, and they appeared to have a period of steady courtship and romantic and sexual interactions before Alucard "left" for the high seas. Rhy was allegedly devastated, Kell describing the action as "breaking his heart." Kell himself banished Emery from London.

However, when Alucard returned for the Elemental Games, Rhy seemingly forgave him, at least at first. He later showed mistrust and asked that he complete his quest before pursuing a relationship again. Despite that, Rhy has a great deal of love for him; he even endangered himself looking for Alucard when the city was under attack. The two are currently lovers. 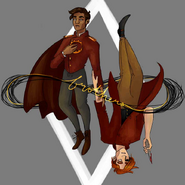