Shades of Magic Wiki
Register
Don't have an account?
Sign In
Advertisement
in: The Steel Prince comics

It was be released in four issues before being published as a bind-up copy. The issues came out every month from October 2018 to January 2019, and the bind-up was released in March 2019.

The comic will delve into the thrilling backstory of Kell's adoptive father, prince Maxim Maresh, before he became the king of Red London. When Maresh is sent to a violent and unmanageable port city far away to cut his military teeth on strict orders from his father, King Nokil Maresh, he encounters an unruly band of soldiers, a lawless landscape, and a newly returned pirate queen.[1]

In Titan's new Shades of Magic: The Steel Prince series, young and unruly Prince Maxim of Red London is sent to the lawless city of Verose after disobeying the King. Little does he know that a fate worse than exile awaits him on the Blood Coast...[2] 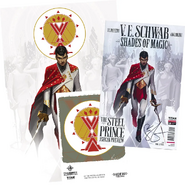 Cover A. Art by Lenka Simeckova.

Cover B. Art by Claudia Ianniciello.

Cover A. Art by Toni Infante.

Cover B. Art by Roberta Ingranata.

Cover A. Art by Andrea Olimpieri.

Cover B. Art by Roberta Ingranata and Warnia Sahadewa. 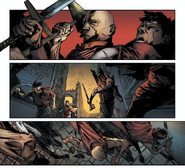 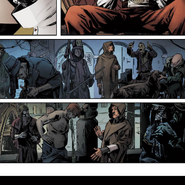 Preview of the ashcan copy. 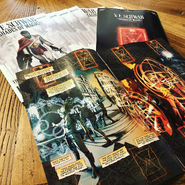