The comics tell various stories about Maxim's time at the Blood Coast when he was Rhy's age,[5][6][7] specifically how he killed the pirate queen, survived the Night of Knives, and defeated the rebel army.[8][9] 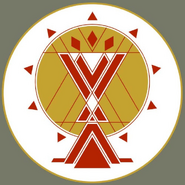 Design of the emblem of Arnes and the House of Maresh.