Until 2021,[6] she wrote adult novels under V. E. Schwab and young adult and middle-grade novels under Victoria Schwab.[7] From 2021 onward, all of her books will be published under "V. E. Schwab."[6]

Schwab originally studied Astrophysics before changing her major six times until she settled on Communication Design for her undergrad. She also has a Master in Medieval Art History,[9] and a Minor in Creative Writing.[10]

On May 1, 2018, Schwab held the sixth annual J.R.R. Tolkien Lecture on Fantasy Literature in Pembroke College, Oxford. Their speech was titled "In Search of Doors."[11]

List of teasers Schwab shared which can be from any of her upcoming books and, thus, do not necessarily belong to the Shades of Magic series.

She lived and worked in the little shop, surrounded by broken magic and a dead owl named Vares.

This isn't the beginning, but it's a place to start.

The master of the house is hungry. 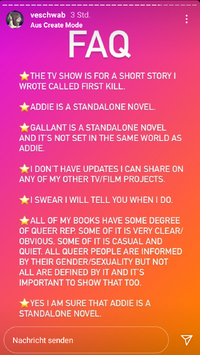 Apart from the potential A Darker Shade of Magic movie, the following works by Schwab are currently considered to be adapted into either movies or TV shows:

When it's time for teenage vampire Juliette (Sarah Catherine Hook) to make her first kill so she can take her place among a powerful vampire family, she sets her sights on a new girl in town named Calliope (Imani Lewis). But much to Juliette's surprise, Calliope is a vampire hunter from a family of celebrated slayers. Both find that the other won't be so easy to kill and, unfortunately, way too easy to fall for.